Clock Exhibits You May Want To See

The Time On The Road Gallery

From pocket sundials to pocket watches, travelers have used portable timepieces over the years. As inventors and manufacturers such as Karl Benz, Gottlieb Daimler, Charles and J. Frank Duryea, Henry Ford, and Ransom E. Olds furthered the development of the automobile, a new breed of clock was introduced—the car clock.
By 1908, speedometer companies were producing and marketing clocks as after-market accessories. As cars grew in popularity, several clock companies began catering to the growing market. In some cases, there was a clear crossover between marine clocks and automobile clocks. Waltham, a major supplier of car clocks, marketed identical timepieces for both automobiles and boats.

Customers had many choices for their car clocks. Manufacturers offered models that mounted on interior surfaces such as the dashboard, steering wheel, gearshift, and rear-view mirror. By the 1930s and 1940s, electric automobile clocks were in production, but mechanical clocks were still being offered. It was not until the 1950s and 1960s that electric clocks truly dominated the market, at least until the advent of quartz technology. 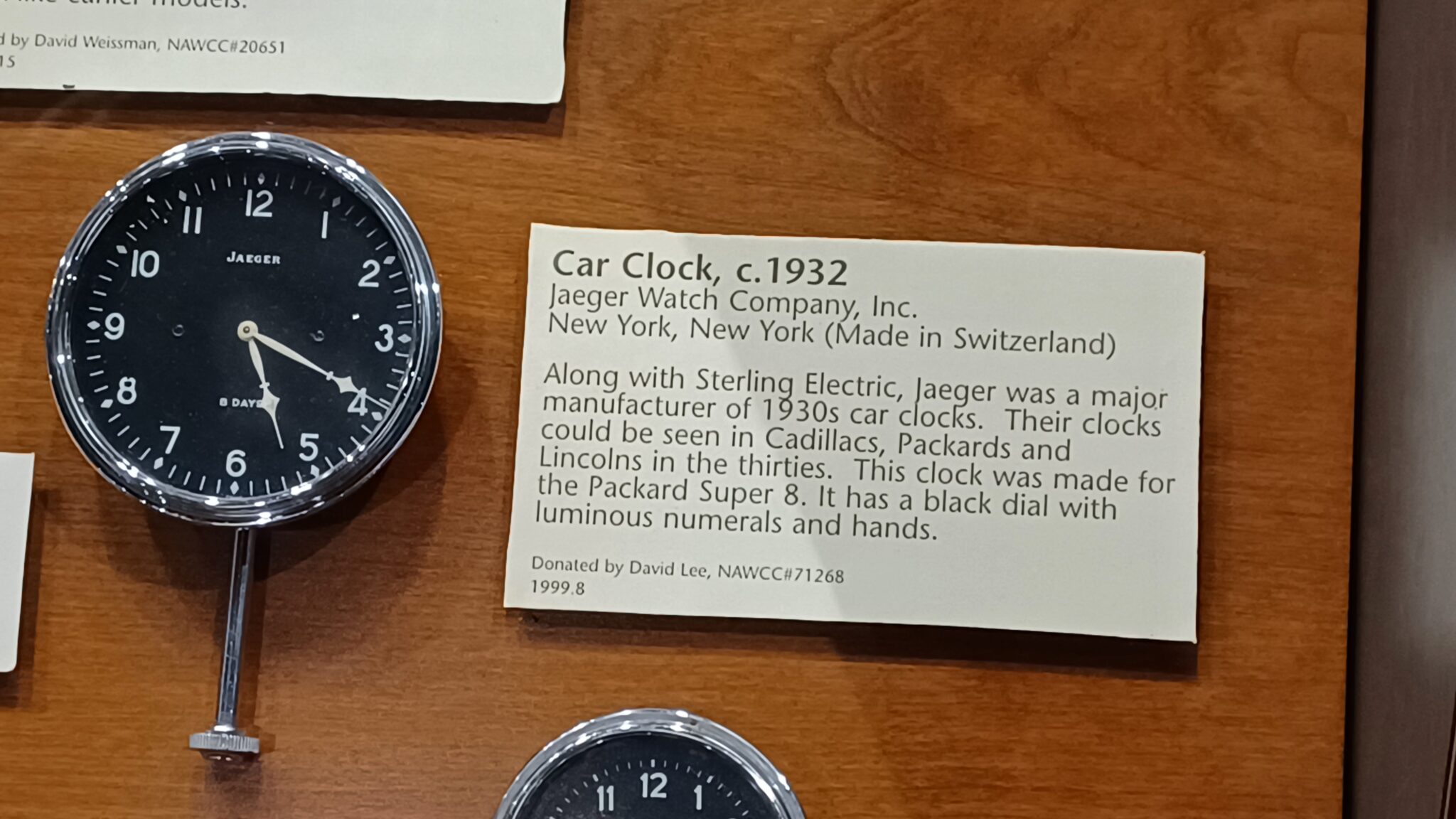 One of the many interesting things you’ll learn at this exhibit is as early as the 1700s, it was widely known that temperature affects clock metals, diminishing accuracy. George Graham performed research in 1715 on the thermal reactions of different metals, hoping to find two metals whose rates of expansion would “compensate,” or cancel one another out. He found such a relationship between steel and the viscous metal mercury, and went on to introduce a mercury-compensated pendulum in 1722.

As clockmakers coupled a growing understanding of metallurgy with new technological designs, timekeeping accuracy continued to improve.  By 1900, the Riefler Company of Germany was making timekeepers accurate to within 1/100th of a second per day. This performance was due not only to improved mechanics and materials,  but also to new case designs. To keep pressure, temperature, and humidity as constant as possible, manufacturers put precision clock movements in airtight cases called tanks. Precision clocks produced by W. H. Shortt in the 1920s were believed to keep time within two milliseconds (0.002 seconds) a day, but when tested in 1984, the clock kept time within 200 microseconds a day, or 10 times more accurately than previously believed.

Where To See These Exhibits

The web address for the National Association of
Clock and Watch Collectors
www.nawcc.org